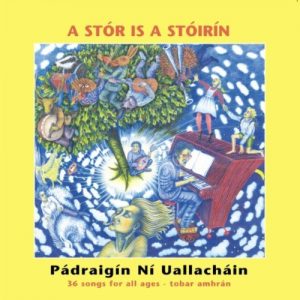 An Dealg Óir / The Golden Thorn is the fifth album of traditional songs from Pádraigín Ní Uallacháin. In the course of her research on the southeast Ulster song tradition Pádraigín discovered some magnificent songs that have never been recorded. They all originate in the south-east Ulster song tradition which includes the coastal area of Omeath in Co. Louth and have been selected for instrumental accompaniment from a collection of 54 songs – ‘A Hidden Ulster’, a book and two CDs which comprises a detailed background study of the song tradition of South-East Ulster.

The CD is a collaboration with produce Steve Cooney. His imaginative and instinctive arrangements has imbued the tracks with a fresh contemporary feel while retaining the integrity and simplicity of the original music. Joining them are some of Ireland’s finest musicians including Steve, Liam O’Flynn, Laoise Kelly, Liam Ó Maonlaí, Ódhrán Ó Casaide, Helen Davies, Máire Breatnach, Rónán Ó Snodaigh and Pat Crowley. Light rhythmic songs, majestic laments and songs of love in a vibrant and beautiful reawakening of the tradition.

Praise for ‘An Dealg Óir’

Last year saw the publication of Pádraigín Ní Uallacháin’s exhaustively-researched book Songs Of A Hidden Ulster, together with two CDs featuring a cappella renditions of 54 songs. Now she’s selected 14 of those songs to present with accompaniment, courtesy of a varied line-up of musicians marshalled by producer Steve Cooney. He’s done a brilliant job of matching the arrangements to Ní Uallacháin’s honest, technically adept but always unpretentious singing: ‘Amhrán Na Craoibhe’ is given a complex treatment with an all-star cast consisting of Liam O’Flynn, Máire Bhreathnach, Odhrán Ó Casaide, Kíla’s Rónán Ó Snodaigh and Cooney himself, while ‘Is Fada An Lá’ sounds just right with solo piano backing from Pat Crowley, and other tracks use unadorned harp or guitar accompaniment. The extensive and informative sleeve notes whet the appetite for more.
Sarah McQuaid, Hotpress Magazine

In his introduction to The Hidden Ireland, published in 1925, Daniel Corkery wrote that until ‘a comprehensive study of the folk-poetry – the most precious heritage of all produced by the Gaels … as well as of the folk music … one cannot have any idea of their hidden lives’. Corkery was writing of Gaelic Munster in the eighteenth century, but he could just as easily have been speaking of south-east Ulster, the area known as Oriel, Gaelic speaking into the twentieth century and bearing a centuries old literary tradition.

One of the most celebrated poets of that tradition, Peadar Ó Doirnín, was the subject of a commemorative concert in the Gaiety Theatre in Dublin in 1969, organised on the occasion of the bi-centenary of the poet’s death. Two aspects of ‘Hidden Ireland’ coincided that night in the heartland of the Pale; the ‘hidden‘ culture that was traditional Irish music and song, and the work of an eighteenth-century Gaelic Ulster poet, both largely unacknowledged in mainstream Irish culture of the day.

The recording of that event, Ó Riada sa Gaiety, issued by Gael Linn, marks an emblematic moment in modern Irish cultural history, when under the inspirational lead of Seán Ó Riada (who was himself influenced by Corkery) the country seemed for a moment to be on the brink of a radical engagement with Gaelic culture, or at least its music and song tradition.

False as that dawn was, the call of the ‘Hidden Ireland’ has not entirely been reduced to a nifty title for upmarket B&B tourist guides. Preceding by some months the publication of Pádraigín Ní Uallacháin’s magisterial study of the song tradition and culture of south-east Ulster, A Hidden Ulster [see the review in p. 16], her recent album, An Dealg Óir, engages with the hidden, the obscure and the forgotten in the area known as Oriel. The fourteen songs performed are taken from the fifty-four songs which form the basis of the book and range far and wide over the cultural canvas, from the seventeenth-century poet/harper tradition to Ulster versions of more commonplace songs in the living tradition.

The album’s title An Dealg Óir/ The Golden Thorn is taken from a line in the lovesong ‘Máire Bhán’, once popular throughout south Ulster. The word dealg in Irish can mean either a thorn or a pin or brooch, and can function both as a beautiful ornament and barb. The sting of loss is felt even as the listener exults in the abundance of music, poetry and the limpid idiomatic diction of Pádraigín Ní Uallachaáin‘s Ulster Gaelic.

In the introductory sleeve notes she describes Gleann Déise, the area where she lives, remote and lonely and unfrequented, as a ‘silent Gaeltacht’. These fourteen songs are the sound of that silence.

The exquisite ‘Ailí Gheal Chiúin ‘ written in song metre by seventeenth-century poet Séamus Dall Mac Cuarta and set by the harper Patrick MacAlindon eloquently testifies to that silence. No work of Mac Cuarta’s has ever been recorded although he was, as a collaborator with MacAlindon, an accomplished artist in the poet/harper tradition of the seventeenth/eighteenth centuries. Another song from the poetic tradition, Cathal Buí Mac Giolla Ghunna‘s ‘An Bonnán Buí’, featured here in a version found in Crossmaglen, County Armagh, has happily survived in the original Irish-language version as song and in translation as poem, although we are reminded in the notes that the Bonnán Buí, or Yellow Bittern, has itself made the terminal journey from endangered to extinct.

Art Mac Cumhaigh’s elegy for Art Óg Ó Néill and the Ó Doirnín attributed lament for Séamus Mac Murfaidh are tour de force interpretations of ancient grave lay ‘performance’, the latter relying completely on the voice to convey its urgent grief over the abyss of 250 years. The former ran to

The theme of regeneration visually expressed in the album cover’s illustration of ‘The May Bush’ is sounded in ‘Thugamar Féin an Samhradh Linn’ and the incantatory ‘Amhrán na Craoibhe’, and in the dedication to the singers and collectors of Oriel ‘who left behind fragments of an ancient singing tradition in the belief that it would flower again’. ‘Ní bás ach athfhás‘ is what is signalled in this singer’s decision to perform these songs with accompaniment except in the case of the lament mentioned above. With the exception of two harp arrangements by Helen Davies the instrumental arrangements were created by Steve Cooney, whose capacity for extending the instrumental possibilities of song without ever disturbing the vocal web is nothing if not inspired. The accompanying performances of Liam O’Flynn, Steve Cooney, Máire Breathnach, Laoise Kelly, Odhrán Ó Casaide, Liam Ó Maonlaí, and Ronán Ó Snodaigh bring the material sharply in contemporary focus.

Nuala O'Connor, The Journal of Music