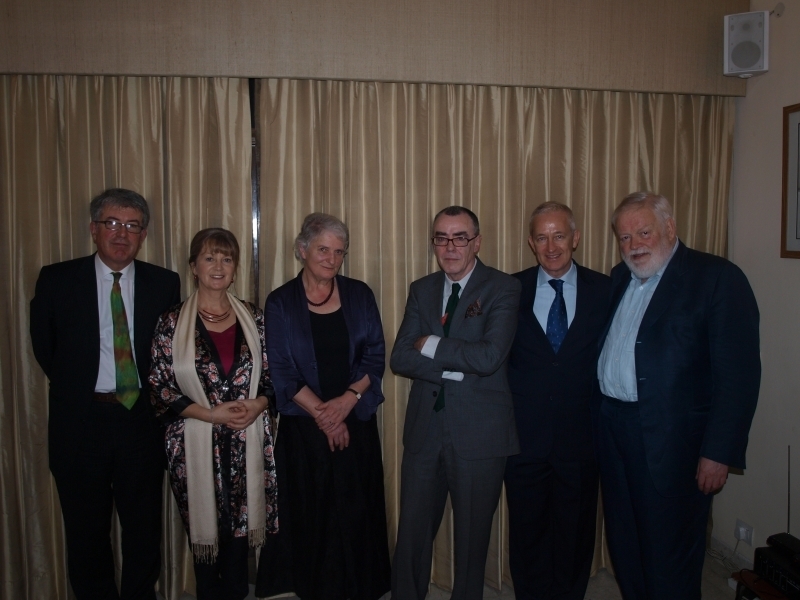 Some of Ireland’s most distinguished poets have joined together with their Indian counterparts to celebrate a week long festival of languages and culture in New Delhi, Hyderabad and Kolkata.

Believed to be the first event of its kind, this cultural festival provides the literary traditions of India and Ireland an opportunity to build on the shared history of excellence in poetry from W.B. Yeats and Rabindranath Tagore to today’s finest writers and critics including Nobel Laureate Seamus Heaney.

Today’s event, which takes place at 7pm in the Oberoi Grand Hotel, Kolkata has been supported by the British Council and Queen’s University Belfast, where many of the participating Irish poets are based.

Those taking part from India are: Ashoke Viswanathan; Jayanta Mahapatra; Sunil Gangopadhyaly; Professor Babaneeta Dev Sen; Srijato and Manang Dai. The Irish delegation includes: Michael Longley, Ireland Chair of Poetry and one of the foremost living poets in the English language; Ciaran Carson, Director of the Seamus Heaney Centre for Poetry at Queens University; Ed Larrissy, Professor of Poetry at the School of English at Queen’s; Pádraigín Ní Uallacháin, traditional singer in residence at the Seamus Heaney Centre for Poetry, and Edna Longley, Professor Emerita at Queen’s.

Speaking about the evening President and Vice-Chancellor of Queen’s University Belfast, Professor Peter Gregson said: “Since the early 20th century Queen’s has been home to a vibrant and diverse poetic tradition. Indeed, it is little surprise that the Times Literary Supplement has said that ‘poetry is now the activity for which Queen’s is best-known throughout the English-speaking world.’

“Queen’s has many assets, but our reputation as a centre for poetry is one that we particularly prize. Few other universities in Britain and Ireland can point to such a wealth of talent, and such a single contribution to modern poetry.
“It is therefore a great privilege that Queen’s can share this wealth of talent with fellow artists in India and compare how their experiences have helped shape modern-day contemporary Indian and Irish poetry.”

Taking part in the event, Ciaran Carson, Director of the Seamus Heaney Centre for Poetry at Queen’s said: “Poetry is one of the areas for which Queen’s University is internationally known, and the Seamus Heaney Centre is at the heart of that endeavour, whether through the work of its poets and critics, or its links with other art-forms, especially traditional singing and music. Poetry transcends international boundaries and we greatly look forward to exploring it further with our fellow poets in India.”

The visit to Kolkata was part of a ten day visit to India by a senior delegation from Queen’s University and also included visiting major institutions in New Delhi, Hyderabad and Bangalore. The purpose of the visit was to strengthen existing links and to develop new partnerships which would be of mutual benefit to the Indian economy and education sector and those of Northern Ireland.